Increasing temperatures and heat waves due to climate change, combined with air pollution, constitute major health risks, and could cause an increase in cardiovascular and respiratory diseases across Europe. EXHAUSTION (Exposure to heat and air pollution in Europe – cardiopulmonary impacts and benefits of mitigation and adaptation) aims to quantify the changes in cardiopulmonary mortality and morbidity due to extreme heat and air pollution (including from wildfires) under selected climate scenarios. 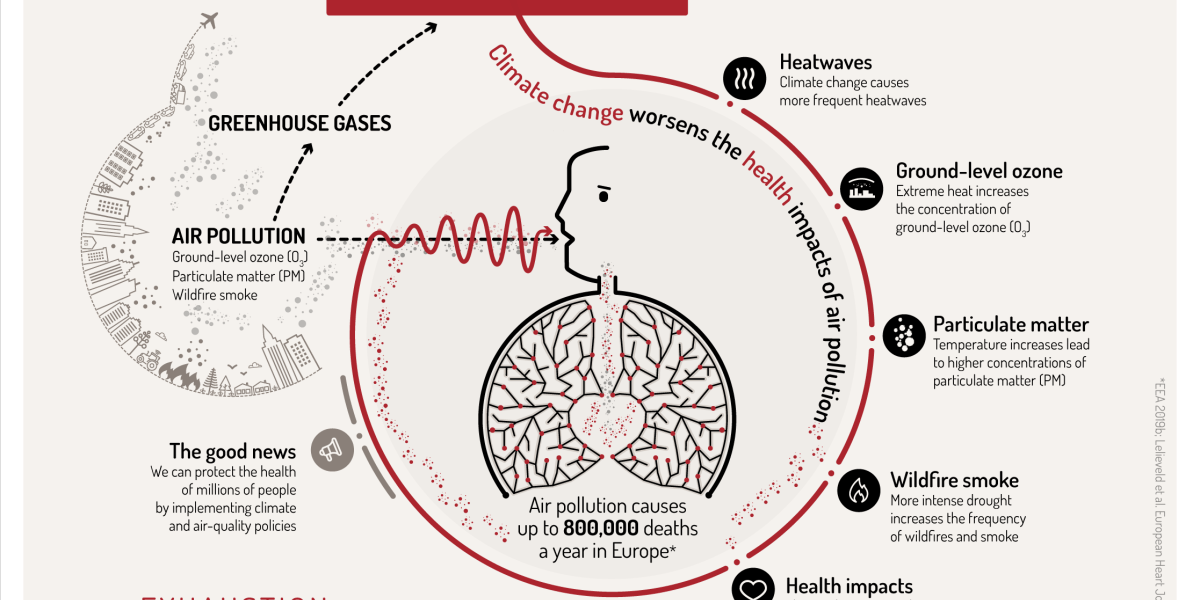 Extreme heat is identified as a key climate change risk in Europe in the near and long term. Extreme heat increases the rates of death (mortality) and can exacerbate a range of diseases (morbidity). In particular, heat increases mortality and morbidity for cardiovascular and respiratory diseases (CVD and RD), which together constitute cardiopulmonary diseases (CPD). Increases in heat-related mortality are projected to outweigh reductions in cold-related mortality, and increasingly so with greater degrees of warming.

The health effects of extreme heat are interlinked with air pollution in several ways. Air pollution is currently the largest environmental killer in Europe, causing ~500,000 premature deaths annually. Previous studies indicate that there may be synergistic effects of extreme heat and air pollution on cardiopulmonary disease outcomes. Moreover, extreme heat may increase air pollution levels, which is linked to large-scale (synoptic) meteorological features. Modelling and observational studies suggest that especially surface ozone (O3) and fine particulate matter (PM2.5) increase in many populated regions as temperature increases, even when emissions of air pollutants are not increasing. O3 and PM2.5 are two major air pollutants that increase the risk to human health and cardiopulmonary disease in particular.

The risk of wildland fires increases during periods of extreme heat and decreasing precipitation. Wildland fires cause intense air pollution and PM2.5 exposure due to wildland fire emissions is already an important contributor to mortality in Europe. Elevations in cardiopulmonary diseases mortality during wildfires appear to be larger than what would be expected from the increased pollution levels only. In an increasingly warming world, episodes of extreme heat and high levels of PM2.5 and O3 are likely to occur simultaneously, could occur more often, last longer, and become more intense – causing increasing health risks.

The current cost of cardiovascular and respiratory diseases in total in EU is estimated at nearly €600 billion. This means that environmental stressors that adversely affect cardiopulmonary disease may bring ill health to a large number of Europeans and could have a substantial socio-economic impact.

The vulnerability to heat stress may differ widely among population groups due to complex causal pathways and differential vulnerability associated with contextual and individual factors. Excess mortality during extreme temperature events is largely preventable to the extent that adaptation measures can be tailored to alleviate contextual and individual vulnerability factors or otherwise mitigate the risks to vulnerable populations. To develop climate change adaptation policies, a detailed understanding of the predominant vulnerability factors in different communities and regions is needed.

EXHAUSTION will address key knowledge gaps as listed by IPCC, including the following:

Published health risk projections do not properly account for adaptation.

There is a lack of knowledge and appropriate models regarding possible interactive effects of extreme heat and air pollution.

Quantitative projections of the costs associated with the health risks are suffering from a simplified modelling of the complex relationship between climatic and non-climatic factors, human health, and the socio-economic consequences.

EXHAUSTION will advance on these issues–adaptation, interactive effects, and socio-economic costs – and quantify the changes in cardiopulmonary disease under selected climate scenarios while including a diverse set of adaptation mechanisms and measures, calculate the associated costs, and identify effective interventions for minimizing adverse impacts. The EXHAUSTION consortium is multidisciplinary, encompassing specialists in climate and air quality modelling, cardiopulmonary medicine, epidemiology, health impact assessment, economics, and science communication. Moreover, the Consortium is pan-European, with participation of 14 partners from 10 countries in Europe and representing the territories subject of study in the project.

Climate change is undermining every dimension of global health monitored, states the most recent Lancet Countdown report that is tracking the connection between health and climate change.

Heatwaves hit the most vulnerable hardest

Climate change is increasingly impacting people's health all over the world. As heatwaves become hotter and more frequent, the most vulnerable suffer the most.

Lessons from the EXHAUSTION project

The Climate Impacts group is an interdisciplinary group with high-level expertise on climate, air-pollution and economic modeling. We conduct comprehensive quantitative impact and risk analyses, including vulnerability, exposure and hazard components.