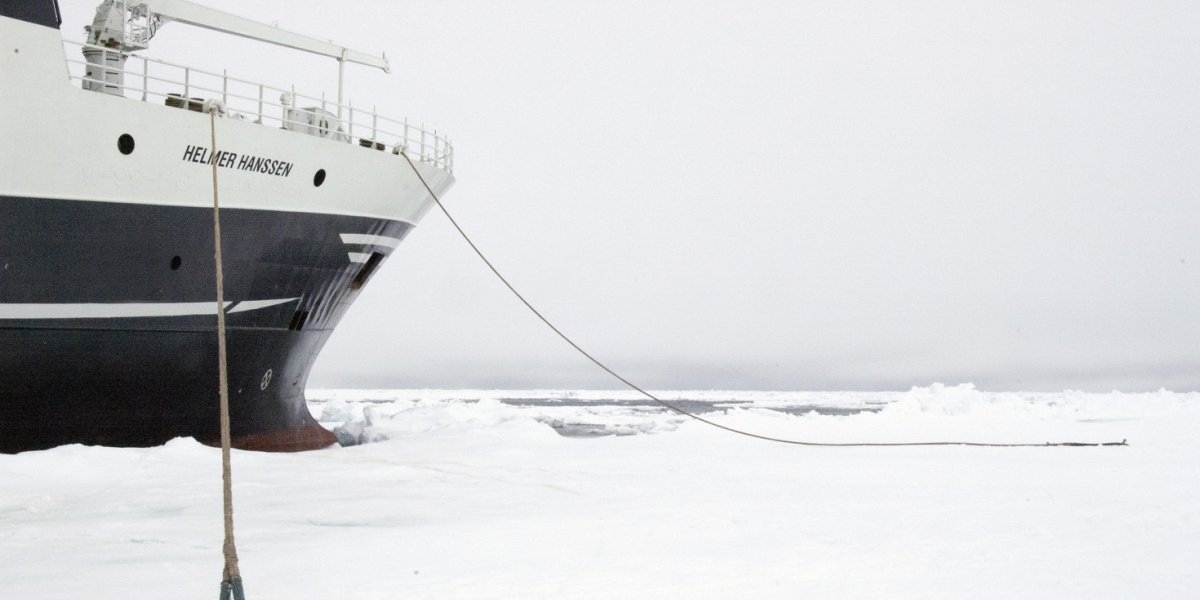 On the edge between climate policy and petroleum exploration

Norway aims to be at the forefront of both climate policy and petroleum production, while also promoting science-based policy. But what if these concerns don’t mesh?

Tip to the question above: Choose science that aligns with your political objectives. That is what top politicians seemed to be doing in the controversy regarding the Arctic ice edge during the spring of 2015. Why would politicians care about an ice edge in extremely remote Arctic waters? Because the ice edge is in effect the boundary between petroleum exploration versus climate policy and other environmental concerns. In this piece we will take a look behind the scenes on how the controversy played out in different policy documents, and in the public debate.

On January 20th, 2015, Prime Minister Erna Solberg famously uttered: “We have not moved the ice edge. It has moved by itself.” The very same day, two different, yet interconnected events took place. One was the news that the management plan for the Barents Sea and Lofoten area would be updated with new data on the ice edge. The other was the announcement of the 23rd licensing round which opened up new areas for petroleum activity in the Barents Sea southeast - an area included in the management plan.

Petroleum exploration is prohibited north of the ice edge in Norway. That makes the ice edge a strategic concern for actors concerned about petroleum activities in the North. It is easy to imagine the ice edge as a line on a map, where the Arctic ice sheet meets open ocean. But instead of a sharp cliff, it makes more sense to think of the ice edge as thick, pulsing belt of slush, ocean and ice. In fact, the ice edge zone is the term used in scientific reports and several policy documents. The ice edge moves many kilometres over the annual seasons, processes increasingly impacted by accelerating climate change. And precisely because of these factors, determining the geographical position of the ice edge is everything else but a straightforward task. Any attempt at doing so would require a definition and a dataset.

In January 2015, the Norwegian government presented new data sets on the Arctic sea ice extent. What may seem as a pretty ordinary event (the data series stretches back several decades) of presenting physical data on a natural phenomenon sparked a heated public discussion. Why? Because no scientifically “correct” definition of the ice edge exists. Which means that different actors can argue for different definitions, in line with their own agendas. We argue that this is what happened, and that it turned the debate about an ice-cold natural phenomenon into a hot political debate, during the spring of 2015.

Instead of using regular climate periods (1960-1991) these new data sets used a fluid version of it (1984-2013 at the time, to be updated annually). Officially, this was to reflect a changing climate in a more precise way. Yet, it was perceived as a clever way of politically moving the ice edge and its limitations for petroleum activity to open up new areas, further north than ever, for exploration. Monitoring programs and facts derived from long data series are expected to increase legitimacy and compliance with decisions, as independent and unbiased insights are expected to reduce diverging views across stakeholder groups. However, neutral and objective science does not always play out in a settling way in political disputes. As we will see in this case, the scientific definitions themselves became the core of the debate.

Defining the ice edge thereby evolved into an area of political interest, and into the Norwegian Parliament, where top politicians discussed scientific definitions from the rostrum. In the end, four different definitions of the ice edge were used. Here, it is interesting to see who used the definitions: three of them has the government as sender, and the Ministry of Climate and Environment has gone from using one of them (definition 1), to another one (definition 2), while still referring to a third one (definition 3).

Four definitions of the ice edge:

Used by the Norwegian Polar Institute (NPI), as well as several NGOs and political parties

NPI is the official knowledge provider of knowledge on polar issues to Norwegian authorities. This does, apparently, not necessarily mean that their opinion on the matter is used by the authorities. This is due to the definition of the ice edge is important for the petroleum sector, making it an issue of political interest. Environmental NGOs and opposition parties continued to use the maximum sea ice extent definition actively, and will likely do so in the future.

Eventually, Parliament refused to accept the Government’s proposal for a new positioning of the ice edge, and asked the Government to come back with another proposal. That means that there is no hard line on the state’s map at the moment.

From proxy to democratic debates

The main reason why the debate about a cold phenomenon became so heated, is that it was – and still is – a proxy for a political debate about petroleum exploration and activities in the Arctic.

The controversy shows how a natural phenomenon, seemingly independent from the social and political world and opinions, can be changed through documents and definitions. The controversy regarding the Arctic ice edge shows how science and policy are interconnected and co-produced. Furthermore, it shows how scientists tried to shy away from policy discussions, while politicians and other actors openly discussed natural scientific definitions, datasets and phenomena.

As pointed out by numerous colleagues, including Berit Kristoffersen, Phil Steinberg, Siri Veland and Amanda Lynch, the case of the ice edge clearly demonstrates the classic STS argument that natural phenomena are not only about nature, they should also be defined and perceived as political phenomena. And it is only by acknowledging that very basic STS lesson that we can recognize proxy debates, and contribute to transparent, democratic deliberation.

The next phase of this controversy plays out as we write this. The government will have a new try in 2020 to get a revised management plan for the area approved by the parliament. In the background report regarding the ice edge, produced by NPI and the Institute of Marine Research, it is clearly stated that their task is not to define where the “administrative limit for these valuable and vulnerable areas should be in a revised management plan”. And so, the story continues...