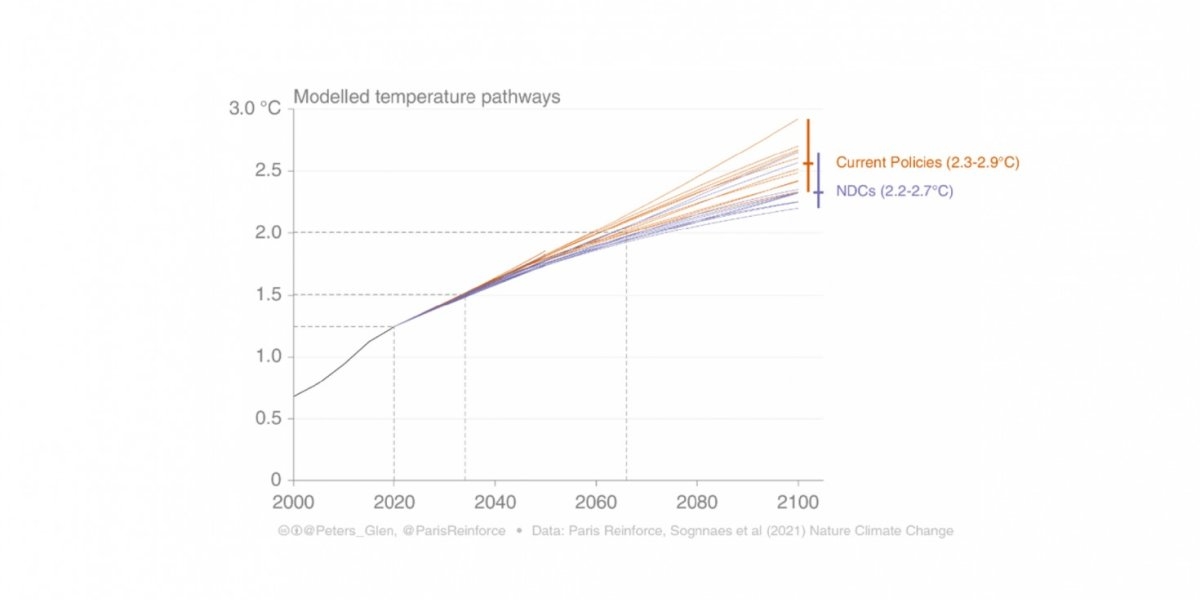 ACROSS THE SELECTED MODELS IN THIS STUDY, CURRENT POLICIES LEAD TO 2.3-2.9°C OF WARMING IN 2100, WHILE EMISSION PLEDGES LEAD TO 2.2-2.7°C.FIGURE: GLEN PETERS, @PARISREINFORCE

During the recent Glasgow Climate Conference (COP26) there was a lot of focus on the climate outcomes of new climate policy pledges. A new analysis shows that these outcomes are more uncertain then often assumed.

The researchers from the EU Horizon2020 project ‘Paris Reinforce’ considered current policies and emission pledges to 2030 and used a diverse set of integrated assessment models to extrapolate the implied effort from 2030 to 2100.

“During COP26 it was confidently communicated that current policies would lead to 2.7°C of warming in 2100 and emission pledges to 2.4°C of warming, while we find that the uncertainties are much greater and that the answer depends on what model is used”, said Ida Sognnaes, a Senior Researcher at CICERO Center for International Climate Research and lead author of the study.

This new study was initiated over a year ago and focused on the model spread when projecting policy effort forward in time. Across the selected models, current policies lead to 2.3-2.9°C of warming in 2100, while emission pledges lead to 2.2-2.7°C. This range expands to 1.7-3.8°C when additionally including the uncertainty in the climate response.

“Most countries have specified policies or pledges to around 2030, but how the implied effort is extrapolated forward through to 2100 is a fundamental uncertainty,” said Glen Peters, a co-author also from CICERO.

The study tried to harmonise as many input data and assumptions as possible, to isolate the effects of model diversity. Even though the study used seven models, the model spread remained significant.

“The large model spread highlights the important role of tools used to inform climate policies and pledges, and the critical need to employ diversified toolboxes,” said Alexandros Nikas, a co-author from the Energy Policy Unit at the National Technical University of Athens.

A new era of climate modelling

With climate policies advancing and technology costs declining, users are less interested in hypothetical scenarios showing fossil fuel dependent futures with little to no climate policy. The interest during COP26 was in where current policies and pledges take us, not on worst case outcomes. This study is one of the few to focus on the challenge of extrapolating policies from 2030 to 2100.

“To date, integrated assessment modelling has overwhelmingly focused on what needs to be done to reach pre-defined temperature targets. Here we instead shine a light on where current efforts are taking us, and it reveals a great deal of uncertainty, depending on the modelling approach,” said Ajay Gambhir, a co-author and Senior Research Fellow from the Grantham Institute - Climate Change and the Environment at Imperial College London. “We could be on a path to just over 2°C, or just under 3°C, with very different climate consequences in each case.”

The authors hope this study will initiate much more focus on how to model current efforts forward.

Another challenge identified in the study is the common use of carbon prices to represent climate policies in integrated assessment models. Carbon prices are often seen as theoretically optimal, but feasible national policy frameworks are generally implemented through a range of diverse regulations, standards, and incentives.

Many integrated assessment models find significant deployment of technologies such as Carbon Capture and Storage (CCS), even under current policy assumptions. The study indicated that the high use of CCS might be an outcome of the use of carbon pricing as a proxy for real-world policies, where the latter might instead encourage the deployment of specific technologies such as wind, solar, or electric vehicles.

“Modellers have long focused on idealised policy assumptions to show alternative pathways to meet policy goals, but our analysis suggests it is important to implement policies in models as they are implemented in the real world,” said Peters. “Real-world policies may lead to different energy systems than theoretically modelled policies”.

Current efforts are not enough

“The large uncertainties indicate that current policies and policy pledges can still lead to warming outcomes of 3°C in 2100,” said Sognnaes. “The false precision to climate outcomes given during COP26 may lead countries to believe they are making good progress, when the opposite may indeed be the case”.

“Predicting emissions in 2030 is difficult enough but extrapolating to 2100 is heroic and requires a good dose of humility to avoid giving false precision,” said Peters.

The PARIS REINFORCE EU-funded project is developing a novel, demand-driven, integrated assessment model-oriented framework for effectively supporting the design and analysis of climate policies in the EU as well as in other major emitters and selected less emitting countries.

The research group works to understand the trends and drivers of historical and future emissions of greenhouse gases and short-lived climate forcers, and their effect on the climate.