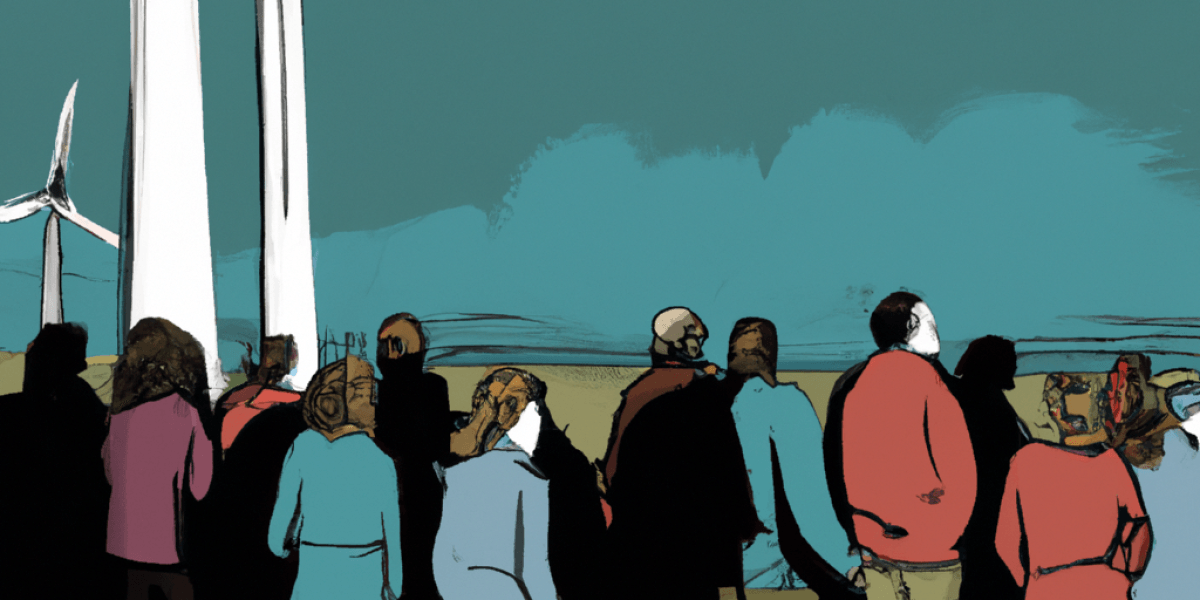 Curious people observing a wind park, as interpreted by the artificial intelligence Dall-E.

Wind power and export of electricity are controversial topics. Understanding what makes them controversial can lead to improved regulations and more broadly acceptable solutions.

Europe is in crisis. This year's heatwaves give an indication of what we can expect more of unless global emissions are reduced, while the war in Ukraine has triggered an acute energy crisis that has spurred many countries to accelerate their renewable plans.

The EU is simplifying permitting requirements for offshore wind production to speed up development of wind power. And Norway is now reconsidering what has been a non-issue for several years: onshore wind development.

'For three years, the allocation of licenses for onshore wind projects in Norway came to a halt after wind power development projects triggered widespread public opposition in 2019,' says Merethe Dotterud Leiren, a research director in CICERO.

At one stage it was an open question whether the opposition to wind power had meant that onshore development in Norway would be halted for a long time to come. But on 8 April this year, the Ministry of Petroleum and Energy announced that the Government would resume case processing of applications for onshore wind projects, and at the end of August the Norwegian Water Resources and Energy Directorate (NVE) announced that it anticipated an influx of development applications. As Kjetil Lund, Director of NVE, recently told the Norwegian News Agency: 'Energy has now become a scarce resource, and we need to develop more.'

Leiren sees several reasons for why this is happening now: 'It has to do with the fact that the energy crisis in Europe and the high electricity prices are bringing electricity production to the fore again. But it's also because it's necessary for reaching Norway's climate targets by 2030, since offshore wind technology isn't sufficiently mature yet.'

Leiren also points out that the authorities have amended the regulations for wind power licensing as a direct consequence of the opposition that came in 2019: 'The opposition to wind power has proved helpful and effective in that it has led to changes in the rules,' Leiren explains.

Among other things, the new rules imply:

* more open processes that are entrenched in municipal planning

* limited possibilities for changes once licences are granted

* greater emphasis on the environment in the case processing of applications

'I'm not that fond of the "not in my backyard" concept, opposition is so much more complex than that. It's not just about panoramic views or people not wanting wind parks in their local area; it's primarily about place identity and preserving national natural assets,' says Leiren.

The reasons why people protest against wind power are complex. Some oppose it because they disagree with how the energy will be used or because it leads to encroachments on nature, and some because they perceive the processes to be inadequate and to lack entrenchment in the local community or because the revenues from the plants will be unfairly distributed between investors and local communities. And for others it's a combination of all these.

'What we're now seeing with the new licensing rules is that the authorities are trying to accommodate some of the issues that triggered opposition in the first place,' says Leiren.

A groups of researchers at the Norwegian University of Life Sciences (NMBU) recently attempted to gauge Norwegians' views on what aspects of wind power development weigh heaviest: location, ownership or intended use of the electricity produced.

'It's important to understand what hinders acceptance so that the authorities can adjust solutions and win support for the green shift,' says professor Kristin Linnerud at NMBU.

The study conducted by Linnerud and her colleagues showed that although – as expected – offshore locations were more popular than onshore, Norwegian ownership and intended use were ranked as even more important.

At the same time, attitudes changed somewhat depending on how far offshore the installations were located: 'The wish for wind power be used primarily to create new jobs and economic activity in Norway was strong for onshore and nearshore wind power, but weakened markedly when offshore wind installations were located farther offshore,' says Linnerud.

In other words, the farther offshore the installation was located, the greater acceptance there was for letting the electricity produced to be used outside Norway.

Far out in the North Sea lies an area called Sørlige Nordsjø II, which is zoned for wind power development. It is located roughly as far from the mainland as it is possible to go in the Norwegian sector of the North Sea. The authorities have approved development of a wind farm field here that will supply Norway with electricity. Whether the field will be linked to the continent with cables referred to as "hybrid cables", which can also export electricity from the mainland, has not yet been decided due to widespread opposition and disagreement within the Government over the export of electricity.

However, the study conducted by Linnerud and her colleagues shows that people may be willing to accept that electricity produced in this field could also be sold abroad.

'The fact that people are less sceptical to exporting energy that is produced farther offshore means that there may leave room to organise, for example Sørlige Nordsjø II, as a hybrid project,' says Linnerud.

Do people prefer offshore to onshore wind energy? The role of ownership and intended use

The study was published in the scientific journal Renewable and Sustainable Energy Reviews.

The research is a contribution from the Centres for Environment-friendly Energy Research (FME), NTRANS and the ENABLE research project. Both are funded by the Research Council of Norway.

We work on understanding how international and national politics and policies affect each other, as well as the effect of climate policy instruments, focusing in particular on the global climate negotiations, climate policy in the EU, USA, China and Norway.